I have been looking forward to these Exo-Armour Dwarfs for some time and I am pleased to say they have arrived on Kickstarter this week, released by Bob Olley of Olleys Armies fame.

There are two sets of these heavily armoured tin cans, a set with more of a chaos flavour and a set that are more pillbox-like, and it is those that will fit in much more with my existing Scrunt army. 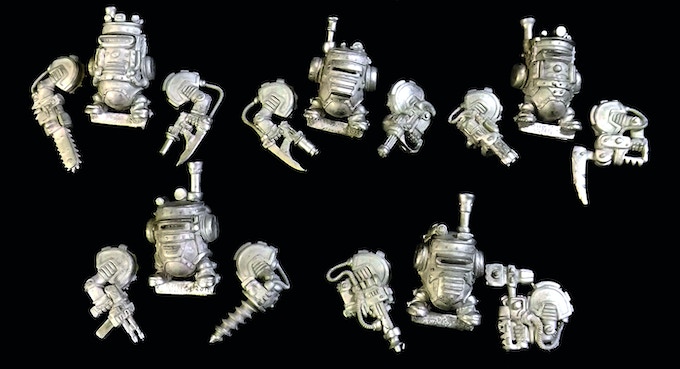 For my Steam Wars game I will require six models to allow me to take two units of three models. Of course, I could always go for more units…

I have already worked out a potential model profile for these which is a bit presumptuous.

One thing I can be sure of is that Bob will deliver this Kickstarter bang on time and these stout chaps will get added to the might of the Prussian Scrunts!

After many months of designing and building various towers for Jim to display for Products For Wargamers at shows, I have started to paint and build some towers for myself.

The first one here, along with a spiral staircase was to test out the colours and connecting sections. So far so good. Five more to go.

As already mentioned, we decided to have some fun and pitch an old Armorcast Reaver Titan up against an equivalently pointed up Knights army.

My Reaver Titan does not come out to play very often, it spends most of its time sitting up on the top shelf in my study gathering dust, some of which is still evident in the pictures.

According to the profiles I have seen for a Reaver in 40K 8th Edition, a Reaver is 120 Power, so Mr Steinbergs task was to form up a detachment of Knights to take it down. Four Knights and Four Armigers took to the field to unleash plenty of firepower against a single target.

The Reaver Titan was armed with a Dual Turbo Destructor Laser, a Twin Titan Mega Bolter and an Apocalypse Missile Launcher, three powerful ranged weapons against a multitude of Knight weapons.

Turn one started with the Knights all moving and using their special Knight House which allowed them to fire after advancing. The Knights inflicted nine wounds in total on the Reaver, still leaving two left before the Reavers model profile would be reduced.

Not really knowing how effective the three weapons would be against the various Knights, I simply aimed a weapon at three different models in a line in front of the Titan. The Turbo Destructor Laser fired off 3 Macro shots and did a total of 13 points, doubled to 26 points of damage against a Crusader Knight, more than enough to destroy it. To make matter worse, the Crusader then exploded and inflicted 5 wounds on the nearby Armiger.

The Reaver then fired its Missile Launcher at the damaged Armiger striking another 8 wounds and blowing it to pieces.

For its third attack, the Mega Bolter took half the wounds off a Knight Errant.

The second turn had the Knights all advancing again, as there were a good mix of close combat weapons, the Knights had to get in close.

However, the second round of firing for the Knights was truly shocking, all of the attacks only causing 1 wound to the Titan.

The second round of ranged attacks for the Titan was devastating again, a Knight Errant took 26 wounds from the Mega Bolter and exploded in a fireball causing 6 wounds to the nearby Knight Gallant.

The Missile Launcher caused 4 wounds to a Armiger Helverin and the Turbo Destructor Laser inflicted 6 wounds to an Knight Errant.

The ranged attacks from the remaining Knights were once again ineffective with no wounds being inflicted on the massive Titan, a devastatingly poor round of shooting from the Knights, their resolve was being tested as their companions were being systematically taken out.

By this stage, the Knights were all within 24″, the minimum range of the Missile Launcher, so the Reaver was effectively reduced to two ranged weapons.

The Reaver took aim at the close combat Knight Gallant and destroyed it with the Turbo Destructor Laser.

The Mega Bolter inflicted 16 wounds on the Knight Errant, greatly reducing its effectiveness.

There were not many Knights left and it was increasingly obvious that the Reaver was going to dominate the battlefield.

The Reaver Titan charged the Errant to use its Greater Titanic Stride attack for the first time, we had no idea if it would be very effective.

The Errant was down taking enough wounds to destroy it even if it had not already been badly damaged.

The surviving diminutive Armiger Knights considered retreating, but they would never out distance the range of the Reaver weapons, the red mist descended and rage took hold of the Knight pilots and they continued to press the attack, the Warglaive charged into combat taking 9 wounds on the way in from the Turbo Destructor Laser. Smoking heavily, the Warglaive struck the Reaver with its Reaper Chaincleaver but the Titan shrugged it off with a rerolled save.

The Reaver retaliated with a 24 wound Greater Titanic Stride attack.

The last remaining Armiger was dispatched with a devastating Turbo Destructor Laser attack with vaporised the target.

Conclusion
It is likely that the Reaver Titan will be going back up on the top shelf for a few years. This was not a fair fight.

The Knights ranged attacks were largely ineffective. Due to the Toughness of the Reaver, they were always needing at least 5+ to wound. The Reaver Void Shields also provided an exceptional save. The Reaver also took out the close combat Knight before it had chance to try out its chainsword and power fist.

The Reaver on the other hand was wounding typically rolling buckets of dice, and wounding on 3’s. In the case of the Dual Turbo Destructor Laser, it was wounding on 2’s and doing double damage against Titanic targets.

We had been talking about having this face off since Mr Steinberg started his Knight army and were thought it would have been a much closer contest.

The good news is we followed this game up with a much more balanced and satisfying “regular” game of Space Marine Successors against Blood Angels.

…A pretty quick game, with only a few units on the Knights side and one massive Titan it was over in fours turns.

The full story will be up soon.

We are planning what could be an interesting game of 40K this weekend, it is an attempt to see how a single Imperial Reaver Titan will do against a Knights army. Will it be a quick game? For sure it will take a while for the Reaver wounds to be reduced, it is more a question of how quickly can the Reaver take out each Knight.

The Reaver Titan has three very powerful weapons so could fire at three different targets each turn. It will be an interesting confrontation and we will attempt to capture the results.

This was definitely a good idea, painting the components before gluing it together.

The hex pattern looks really good and I have painted random hexes for a bit of variety.

These two buildings were the prototypes so not available in this exact design any more, but I will still be using them in games.

I have added pavement bases to them to finish them off. Now ready for inking and painting.

I also have an idea to add some removable interior walls, well maybe one day.

Most of the MDF tower models I have built over the last few months have been for Jim to use on his Products For Wargamers stand at games shoes. I am now getting around to building some for myself.

This time around, I thought I would paint components before I stick anything together.

There is plenty to do, I plan to paint and then build three standard height Industrial Processing Towers (with Pringles tubes) and one double height tower.

All the towers will link together with ground level sections all designed to make one large industrial setup for use in 40K, Rogue Stars and Kill Team.

I just need to see how long it will all take.

Many years ago, I painted up some Grymn models from Hasslefree, a set of seven stout chaps and a couple of armoured character types.

I decided they need a bit of a touch up so did not feel too bad about using them in a game of Rogue Stars. Basically I just wanted to repaint the bases and give them a good inking.

The second set of ruins being inked have interior detail although it was still an unfinished version. I had to add some exterior plank effect to hide some tabs…

A loft full of lead
Blog at WordPress.com.